Rethinking the narrative of economic development, with sustainability in mind
By Jeremy Caradonna

Originally published in The Atlantic - September 9, 2014

Context: This is Chapter 2 of my book, Sustainability: A History. It ran as an article in The Atlantic.

The story tends to go something like this: Inventors, economists, and statesmen in Western Europe dreamed up a new industrialized world. Fueled by the optimism and scientific know-how of the Enlightenment, a series of heroic men—James Watt, Adam Smith, William Huskisson, and so on—fought back against the stultifying effects of regulated economies, irrational laws and customs, and a traditional guild structure that quashed innovation. By the mid-19th century, they had managed to implement a laissez-faire (“free”) economy that ran on new machines and was centered around modern factories and an urban working class. It was a long and difficult process, but this revolution eventually brought Europeans to a new plateau of civilization. In the end, Europeans lived in a new world based on wage labor, easy mobility, and the consumption of sparkling products.

Europe had rescued itself from the pre-industrial misery that had hampered humankind since the dawn of time. Cheap and abundant fossil fuel powered the trains and other steam engines that drove humankind into this brave new future. Later, around the time that Europeans decided that colonial slavery wasn’t such a good idea, they exported this revolution to other parts of the world, so that everyone could participate in freedom and industrialized modernity. They did this, in part, by “opening up markets” in primitive agrarian societies. The net result has been increased human happiness, wealth, and productivity—the attainment of our true potential as a species.

Sadly, this saccharine story still sweetens our societal self-image. Indeed, it is deeply ingrained in the collective identity of the industrialized world. The narrative has gotten more complex but remains à la base a triumphalist story. Consider, for instance, the closing lines of Joel Mokyr’s 2009 The Enlightened Economy: An Economic History of Britain, 1700–1850: “Material life in Britain and in the industrialized world that followed it is far better today than could have been imagined by the most wild-eyed optimistic 18th-century philosophe—and whereas this outcome may have been an unforeseen consequence, most economists, at least, would regard it as an undivided blessing."

The idea that the Industrial Revolution has made us not only more technologically advanced and materially furnished but also better for it is a powerful narrative and one that’s hard to shake. It makes it difficult to dissent from the idea that new technologies, economic growth, and a consumer society are absolutely necessary. To criticize industrial modernity is somehow to criticize the moral advancement of humankind, since a central theme in this narrative is the idea that industrialization revolutionized our humanity, too. Those who criticize industrial society are often met with defensive snarkiness: “So you’d like us to go back to living in caves, would ya?” or “you can’t stop progress!”

What if we adopt a more critical and skeptical attitude toward the values we’ve inherited from the past?

Narratives are inevitably moralistic; they are never created spontaneously from “the facts” but are rather stories imposed upon a range of phenomena that always include implicit ideas about what’s right and what’s wrong. The proponents of the Industrial Revolution inherited from the philosophers of the Enlightenment the narrative of human (read: European) progress over time but placed technological advancement and economic liberalization at the center of their conception of progress. This narrative remains today an ingrained operating principle that propels us in a seemingly unstoppable way toward more growth and more technology, because the assumption is that these things are ultimately beneficial for humanity.

Advocates of sustainability are not opposed to industrialization per se, and don’t seek a return to the Stone Age. But what they do oppose is the dubious narrative of progress caricatured above. Along with Jean-Jacques Rousseau, they acknowledge the objective advancement of technology, but they don’t necessarily think that it has made us more virtuous, and they don’t assume that the key values of the Industrial Revolution are beyond reproach: social inequality for the sake of private wealth; economic growth at the expense of everything, including the integrity of the environment; and the assumption that mechanized newness is always a positive thing. Above all, sustainability-minded thinkers question whether the Industrial Revolution has jeopardized humankind’s ability to live happily and sustainably upon the Earth. Have the fossil-fueled good times put future generations at risk of returning to the same misery that industrialists were in such a rush to leave behind?

But what if we rethink the narrative of progress? What if we believe that the inventions in and after the Industrial Revolution have made some things better and some things worse? What if we adopt a more critical and skeptical attitude toward the values we’ve inherited from the past? Moreover, what if we write environmental factors back in to the story of progress? Suddenly, things begin to seem less rosy. Indeed, in many ways, the ecological crisis of the present day has roots in the Industrial Revolution.

For instance, consider the growth of greenhouse gases (GHGs) in the atmosphere since 1750. Every respectable body that studies climate science, including NASA, the National Atmospheric and Oceanic Administration, and the US Environmental Protection Agency (EPA), has been able to correlate GHG concentrations with the pollutants that machines have been spewing into the atmosphere since the late-18th century. These scientific bodies also correlate GHGs with other human activities, such as the clearing of forests (which releases a lot of carbon dioxide and removes a crucial carbon sink from the planet), and the breeding of methane-farting cows. But fossil fuels are the main culprit (coal, gas, and oil) and account for much of the increase in the parts per million of carbon dioxide in the atmosphere. The main GHGs, to be sure, are carbon dioxide (CO2), methane (CH4), nitrous oxide (N2O), and a few others, many of which can be charted over time by analyzing the chemistry of long-frozen ice cores. More recent GHG levels are identified from direct atmospheric measurements.

What we learn from these scientific analyses is that the Industrial Revolution ushered in a veritable Age of Pollution, which has resulted in filthy cities, toxic industrial sites (and human bodies), contaminated soils, polluted and acidified oceans, and a “blanket” of air pollution that traps heat in the Earth’s atmosphere, which then destabilizes climate systems and ultimately heats the overall surface temperature of the planet. The EPA is quite blunt about it: “Increases in concentrations of these gases since 1750 are due to human activities in the industrial era.” It’s worth noting, too, that the population of the world only began to take off during the Industrial Revolution. For millennia, the population of homo sapiens was well below the 1 billion mark, until that number was surpassed around 1800. The world now has 7 billion people and counting. That’s a lot of people who require food, energy, and housing and who place great strains upon global ecosystems. Consider the following figures: 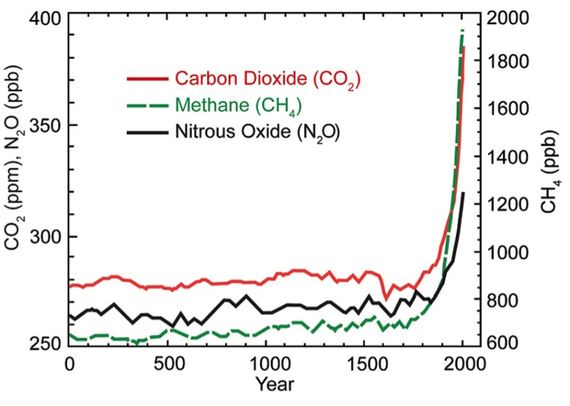 Carbon dioxide (PPM), methane (PPB), and nitrous oxide (PPM) in the atmosphere since 1750. Before the Industrial Revolution, CO2 levels had long been stable at about 280 PPM. Now they’re above 400 PPM. CO2 levels have not been this high for at least 2 million years. (USGCRP 2009) 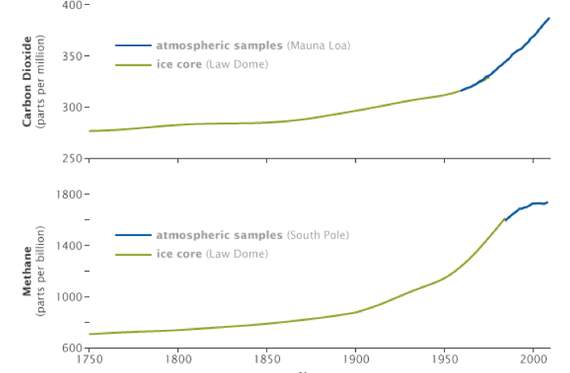 Carbon dioxide and methane levels in the atmosphere since 1750. (NASA, based on data from the NOAA Paleoclimatology and Earth System Research Laboratory) 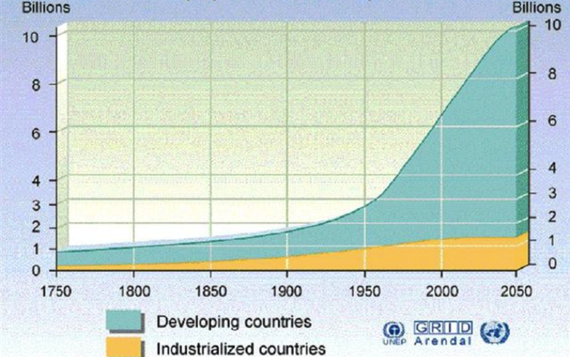 When we take these trajectories into consideration, the Industrial Revolution starts to look like something less than an “undivided blessing.” It begins to look like, at best, a mixed blessing—one that resulted in technologies that have allowed many people to live longer, safer lives, but that has, simultaneously, destroyed global ecosystems, caused the extinction of many living species, facilitated rampant population growth, and wreaked havoc on climate systems, the effects of which will be an increase in droughts, floods, storms, and erratic weather patterns that threaten most global societies.

All of this is to say that the simple-minded narrative of progress needs to be rethought. This is not a new idea: In fact, critics of industrialization lived throughout the Industrial Revolution, even if their message was often drowned out by the clanking sounds of primitive engines. In their own particular ways, thinkers and activists as diverse as Thomas Malthus, Friedrich Engels, the Luddites, John Stuart Mill, Henry David Thoreau, William Wordsworth, and John Muir criticized some or all aspects of the Industrial Revolution. The narrative of industrial-growth-as-progress that became the story of the period occurred despite their varied protestations. The Luddites questioned the necessity of machines that put so many people out of work. Engels questioned the horrendous living and working conditions experienced by the working classes and drew links between economic changes, social inequality, and environmental destruction. Thoreau questioned the need for modern luxuries. Mill questioned the logic of an economic system that spurred endless growth. Muir revalorized the natural world, which had been seen as little more than a hindrance to wealth creation and the spread of European settler societies around the globe.

These figures have provided wisdom and intellectual inspiration to the sustainability movement. John Stuart Mill and John Muir, for instance, have each been “rediscovered” in recent decades, respectively, by ecological economists and environmentalists in search of a historical lineage. For the sustainability-minded thinkers of the present day, it was these figures, and others like them, who were the true visionaries of the age.

This post has been adapted from Jeremy Caradonna's new book, Sustainability: A History.